Here is my TRS detox review …

Throughout the majority of my life, I  was suffering from structural and functional abnormalities. With my methylation issues due to my MTHFR genetic status, I accumulated toxins and wasn’t able to eliminate them well.  Even during my mother’s pregnancy with me, I began accumulating toxins during gestation through the cord blood and placenta, and then the toxic ingredients in the 11 immunizations that I had received throughout my childhood.

I was a tired child, constantly laying in my bed. I was considered lazy. I had learning issues. I considered myself unintelligent. When I was 7 years old I felt a lot of pain in my back area. My parents took me in to get X-rays done, and the orthopedic Dr. said it was just growing pains. I was known as a complainer.

It wasn’t until 30 years later when I became aware of the truth that I had scoliosis. Finally, it was when I had my own child, and she started to have adverse reactions to her immunizations, I searched for ways to detox my daughter in hopes that I could save her quality of life from the damage I had allowed unknowingly. I found TRS, not only did it save her, little did I know that my damaged body would improve from the powers within this blue bottle!!

From the first couple of days of starting, I noticed unimaginable changes. My thinking was clearer, my brain fog was lifting and I had this newfound energy. Within the first 2 months, I started passing a lot of my candida overgrowth.  I also noticed that sensory issues I had with things around my neck or near it like seatbelts no longer bothered me. Then something extraordinary happened right after my second month. I no longer suffered from spinal pain. The cause of my scoliosis seems due to copper toxicity, which caused an imbalance with zinc. I was in excruciating pain doing common housekeeping, carrying my child and even sitting properly.  How am I not suffering anymore? Could it be that my spine straightened!? Yes, it did!! I have lived pain-free ever since. My body has come such a long way. I’m working out and thriving!! I have never been in such optimal health, and I never expected my cognitive impairment would ever improve!!

TRS has been a godsend to me and my family and because of this, I have dedicated my time to helping others remove toxic metals from their bodies and find relief through the use of TRS. 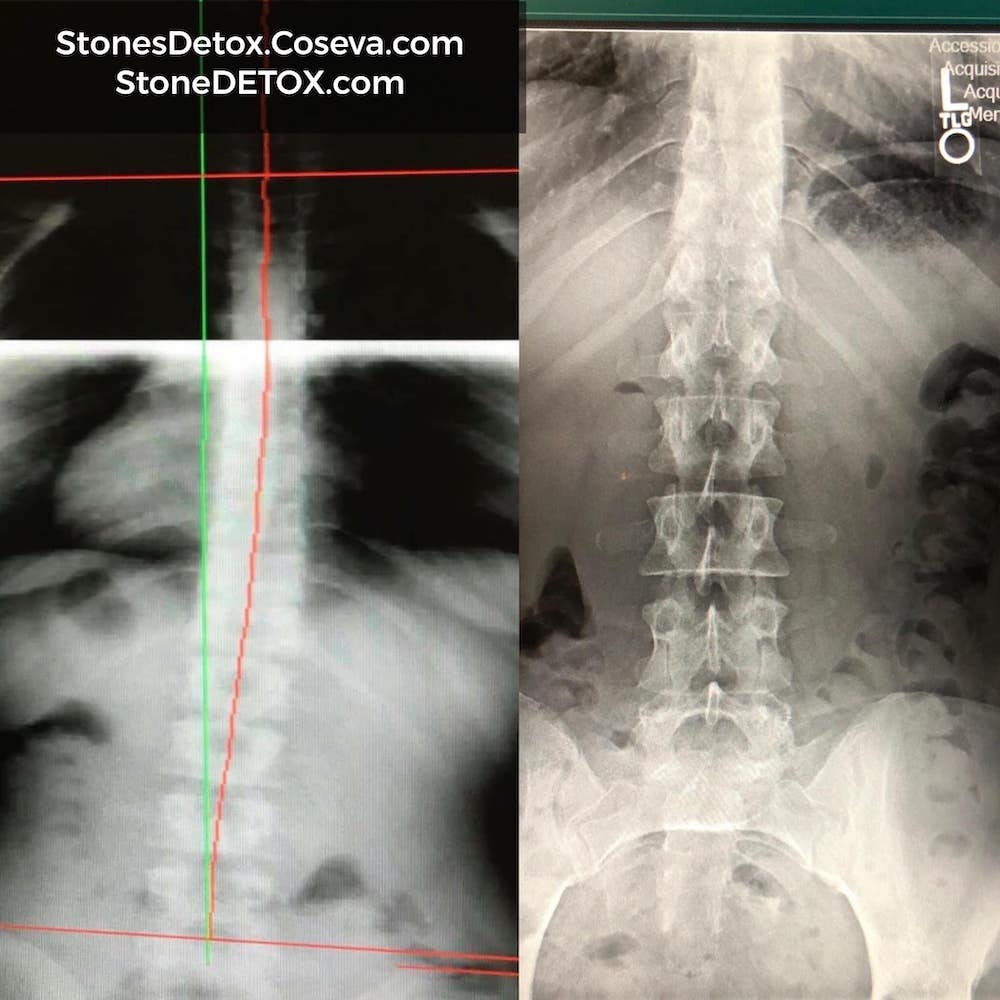 You might be wondering how is it possible that my spine straightened.

When a person suffers from copper toxicity or excess unbound copper stored in organs/tissue, it will also affect the amount of zinc that the body is able to absorb. Ideally, a healthy zinc to copper ratio is 3:1. If you have excess copper, you will have low zinc, and vice versa. Zinc is responsible for healthy bones and bone integrity, so if a person has high levels of copper and low zinc, then their bones may suffer in integrity, and the person could possibly develop osteoporosis or other bone degenerative diseases over time. Here is more detailed information on the signs/symptoms of zinc deficiency for those who are interested: http://www.arltma.com/Mineral_Information/Zinc.html”

If you have other vitamin deficiencies, metals could be the culprit to them due to you genetics and blocked detox pathways

After all my physical and neurological improvements I decided to continue on my health journey. I’m so grateful I did because the gains kept coming!! On my Second year of taking TRS detox spray I wanted to only take TRS without any other supplements, just to see what my extensive blood labs would show…

I’m happy to announce I have more…

1st pic
NT– pro BNP (n-terminal pro b-type natriuretic peptide ) is released into the bloodstream when heart muscle cells are overly stressed because they are work too hard. As you can see they are better , definitely improved from where it was in the beginning. 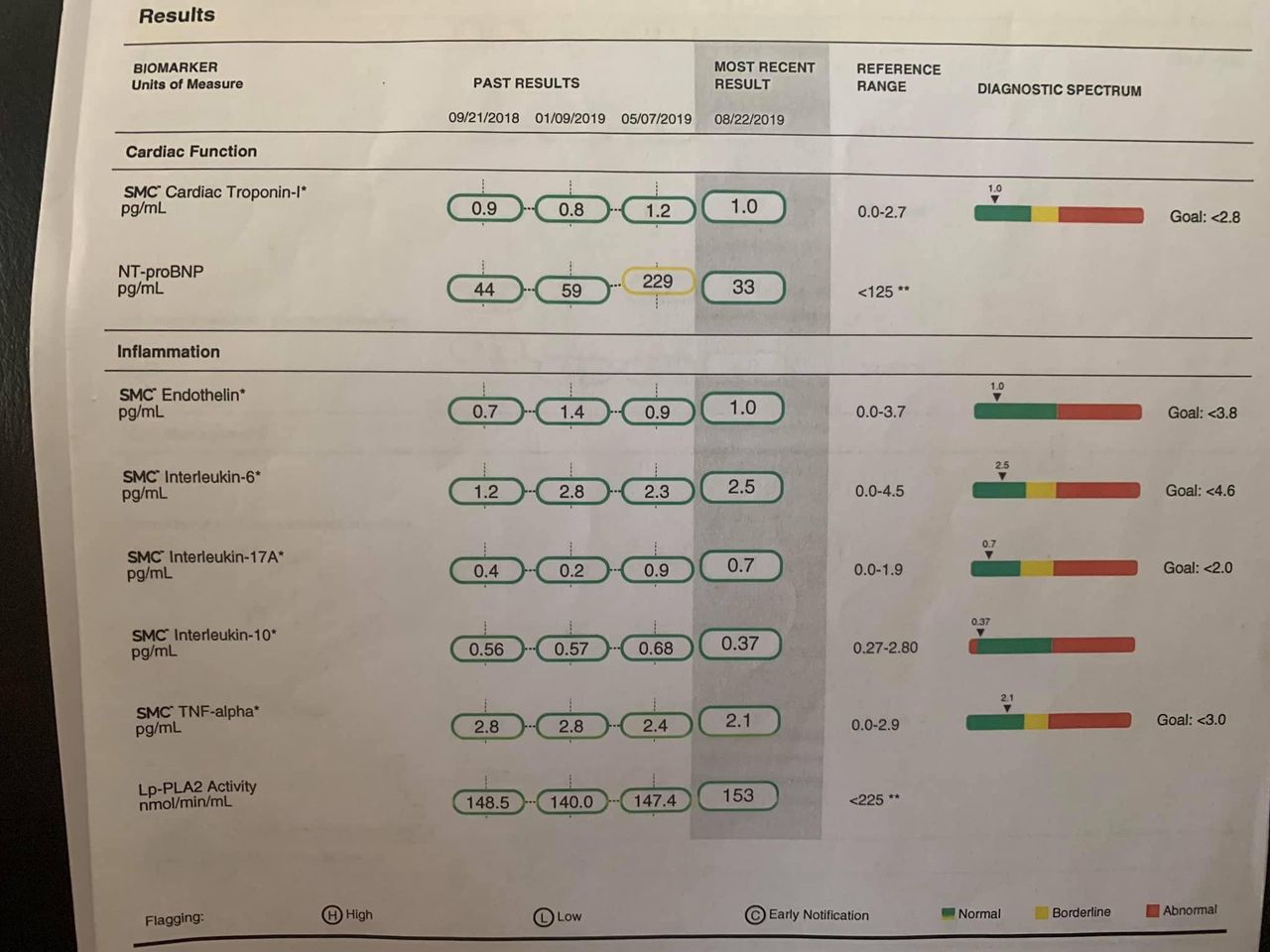 2nd pic
High levels of uric acid increase heart disease risk, and can be caused by kidneys not getting rid of waste, or by a purine-rich diet (found in some meat , seafood , and alcohol and form of uric acid when broken down in the body)
As you can see, my results were 5.8 which was abnormal. My uric acid continuously improved these months by detoxing with TRS.
Uric acid is also found in kidney stones… no wonder people are passing them!!
hs -CRP (high-sensitivity c- reaction protein) A high result is another warning sign of inflammation in your body, which may cause plaque buildup in your arteries, increasing your risk of heart attack or stroke. Detoxing the toxins and heavy metals has let my body improved this.
Apo B (apolipoprotien B ) is found on the surface of LDL high levels have been shown to better predict increased heart and blood vessel disease risk then LDL measurements alone. Amazing improvements!
3 pic

Fructosamine is a compound that is formed when glucose combines with protein.
Cystatin C is a relatively small protein that is produced throughout the body by all cells that contain a nucleus and is found in a variety of body fluids, including the blood. It is produced, filtered from the blood by the kidneys, and broken down at a constant rate. This test measures the amount of cystatin C in blood to help evaluate kidney function. High levels of cystatin C are an early sign of Kenny Palms as well as respect her for heart disease heart attack and stroke. As you can clearly see it has improved from the first time I tested. Reasons why you could see it fluctuate could likely be my body trying to heal it after toxins were removed. Also could be because cystatin C levels fluctuate with changes in GFR.(glomerular filtration rate ).
Definitely a huge improvement!
Magnesium is a mineral that is vital for energy production, muscle contraction, nerve function, and the maintenance of strong bones. 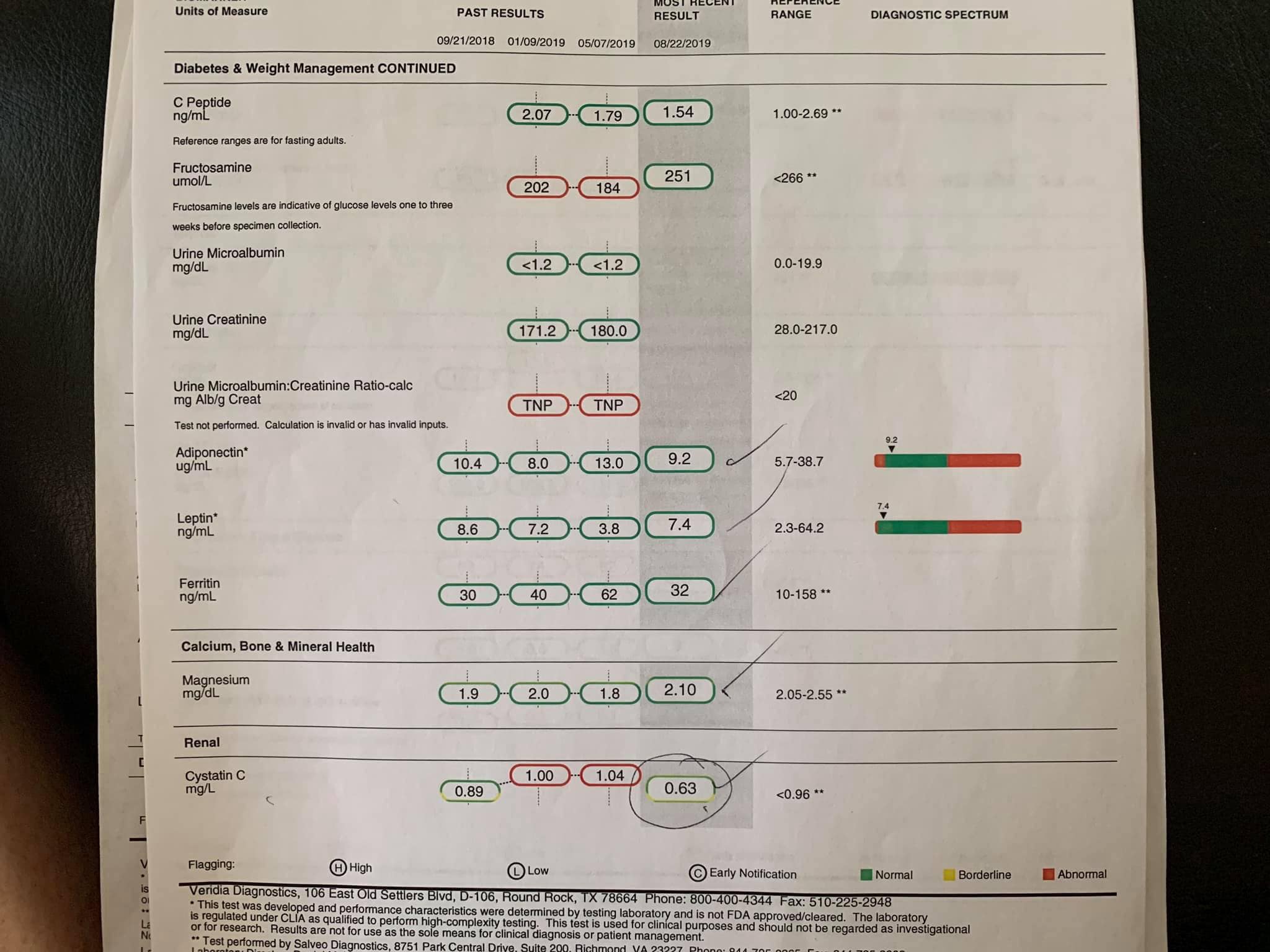 It comes into the body through the diet and is absorbed by the small intestine and colon. Magnesium is stored in the bones, cells, and tissues. Normally, only about 1% of total body magnesium is present in the blood and this makes it difficult to get an accurate measurement of total magnesium content from blood tests alone. A wide variety of foods contain small amounts of magnesium, especially green vegetables such as spinach, as well as whole grains and nuts. Foods that have dietary fiber are usually also sources of magnesium. The body maintains its magnesium level by regulating how much it absorbs and how much it excretes or conserves in the kidneys.
Magnesium deficiencies (hypomagnesemia) may be seen with malnutrition, conditions that cause malabsorption, and with excess loss of magnesium by the kidneys. Magnesium excess (hypermagnesemia) may be seen with the ingestion of antacids that contain magnesium and with decreased ability of the kidneys to excrete magnesium.
Someone with mild to moderate magnesium deficiency may have no or few nonspecific symptoms. Persistent or severe deficiencies can cause nausea, loss of appetite, fatigue, confusion, muscle cramps, seizures, changes in heart rate, and numbness or tingling. They can also affect calcium metabolism and exacerbate calcium deficiencies. Symptoms of excess magnesium can be similar to those of deficiency and include nausea, muscle weakness, loss of appetite, and an irregular heart rate.
I am now in the reference range 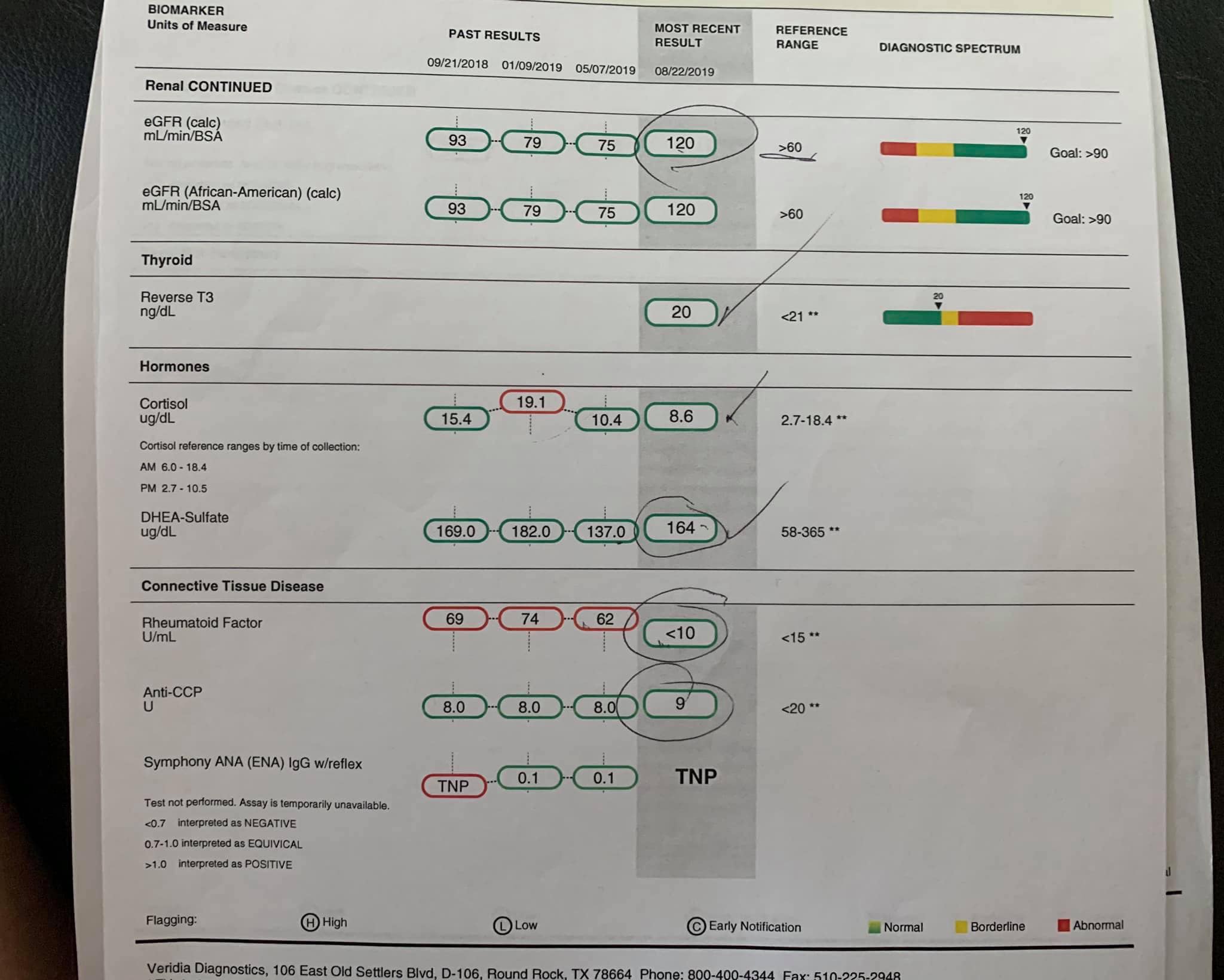 4th pic
Glomerular filtration rate (GFR) is a measure of the function of the kidneys.
Glomeruli are tiny filters in the kidneys that allow waste products to be removed from the blood, while preventing the loss of important constituents, including proteins and blood cells. Every day, healthy kidneys filter about 200 quarts of blood and produce about 2 quarts of urine. The GFR refers to the amount of blood that is filtered by the glomeruli per minute. As a person’s kidney function declines due to damage or disease, the filtration rate decreases and waste products begin to accumulate in the blood.
Chronic kidney disease (CKD) is associated with a decrease in kidney function that is often progressive. CKD can be seen with a variety of conditions, including diabetes and high blood pressure. Early detection of kidney dysfunction can help to minimize the damage.
This is important as symptoms of kidney disease may not be noticeable until as much as 30-40% of kidney function is lost.
My filtration can’t get any healthier !
Cortisol is a hormone that Controls blood sugar, inflammation, and immune response. Constant stress can lead to regularly high levels, increased being risk for type 2 diabetes , and heart disease.
Improvements!
Rheumatoid factor IMPROVEMENTS!!
Here is a test measuring antibodies present in me, where I showed red flags for RA. Not any more!!!! Dramatically down!!

Advanced TRS detox spray is a breakthrough in nanotechnology and the safest way to detoxify heavy metals and other toxins from the body. Stones Detox is an independent distributor of Coseva wellness products. We are committed to guiding people throughout their detox journey to help them lead happier, healthier lives. We have helped many people with a multitude of different health issues, whom have had significant improvements through detoxing!

How can I help?  Are you looking for guidance on your health journey? You came to the right place. When starting, what I needed was someone to cut through all the overwhelming information, to guide me in practical steps to improve my health, and encourage me to stay on track with the new changes in my body. I’d like to be that for you. But don’t just take my word for it.. Here are some Coseva TRS reviews that might be of interest to you. 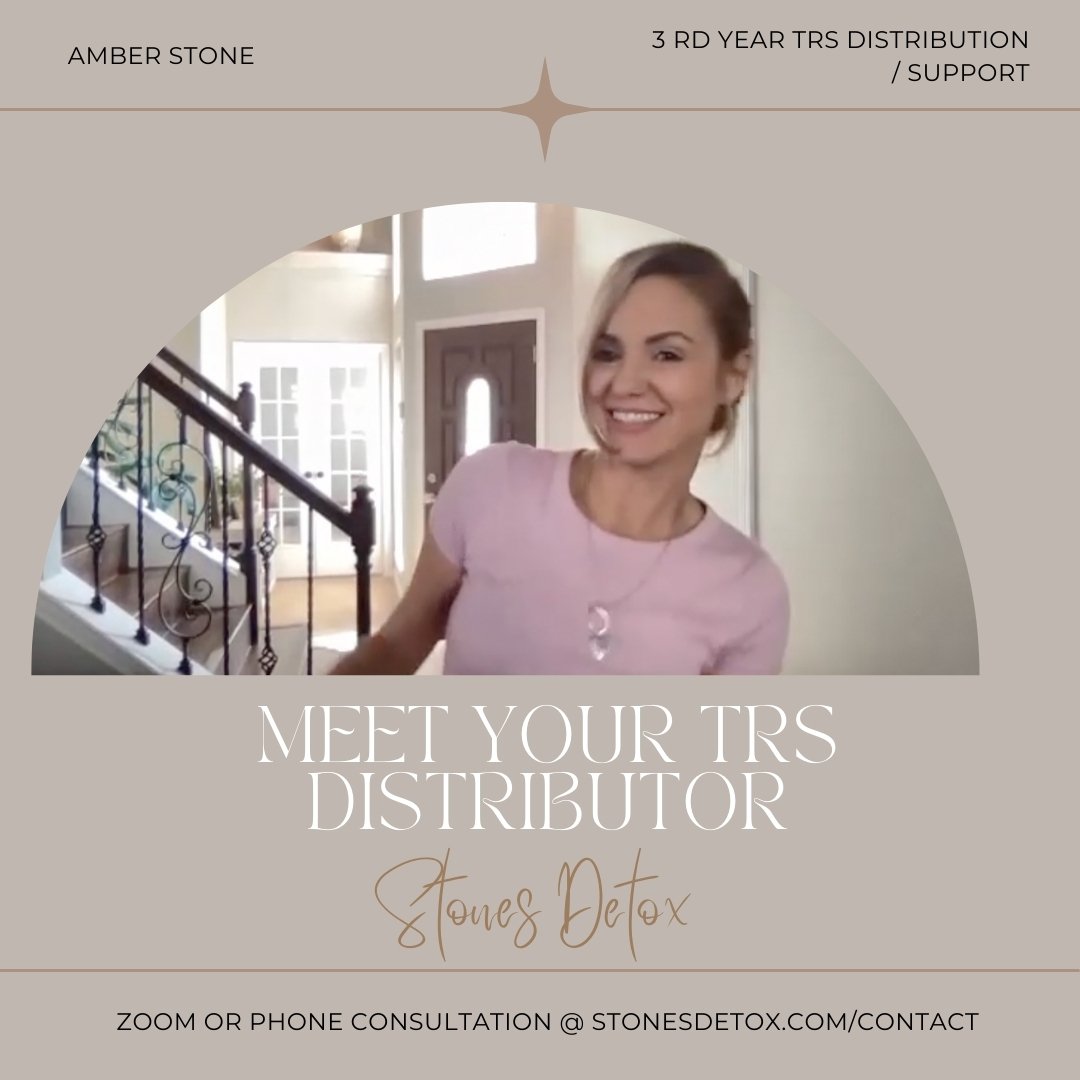